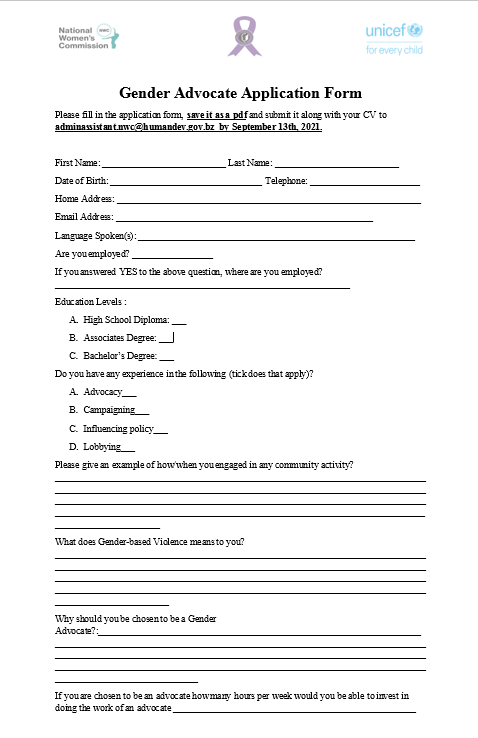 For those person/s interested in the Gender Advocate Volunteer attached please find the Application Form that can be submitted with all additional information e.g. curriculum vitae, references etc.

Kindly print the form,fill out, scan and email to: adminassistant.nwc@humandev.gov.bz 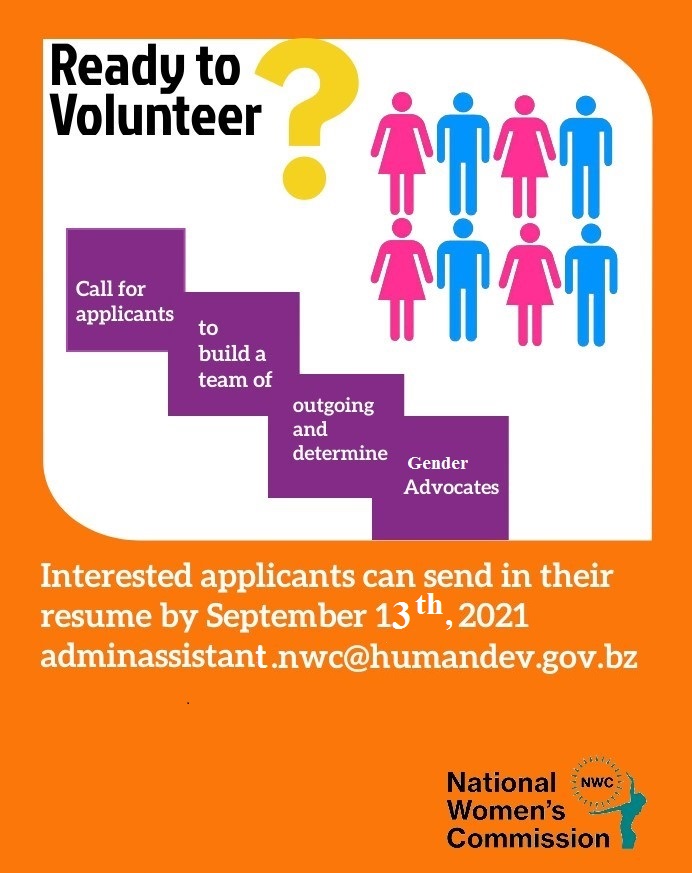 STRENGTHENING THE GENDER BASED VIOLENCE RESPONSE THROUGH GENDER ADVOCATES IN BELIZE

Belize has not conducted a country wide Gender-based Violence (GBV) Survey, but there was a pilot study in two districts (Orange Walk and Stann Creek) in 2015. This study suggested that more than half of all women reported that they had been abused or physically disciplined before the age of 16, and that 22.2% of women had experienced physical abuse and/or sexual abuse by their current partner or a previous partner. However, the study also found that “…the incidence of physical violence by a partner is significantly higher than that of the 22.2% who reported it.” The survey concludes that “With more than 1 in 5 women being victims of domestic violence, and more than 1 in 5 witnessing their mothers being abused by their partners growing up, this is a serious concern for the country of Belize”

Under-reporting leads to an underestimation of GBV figures.[3] Among the reasons for under-reporting are limited availability of services, lack of public awareness and cultural norms that hinder victims to speak out. These factors are particularly pronounced in rural areas.[4]

Of concern to the national response is the absence of immediate services in the rural areas of the country. Belize has around one hundred ninety-six (196) villages and communities spread in some cases far apart from each other and from the main towns which are the center of government services. The GBV survey notes that, women in rural villages with less access to agencies, safe houses, and other resources, and who face fear of being ostracized in their communities if they speak out, may be particularly at risk. 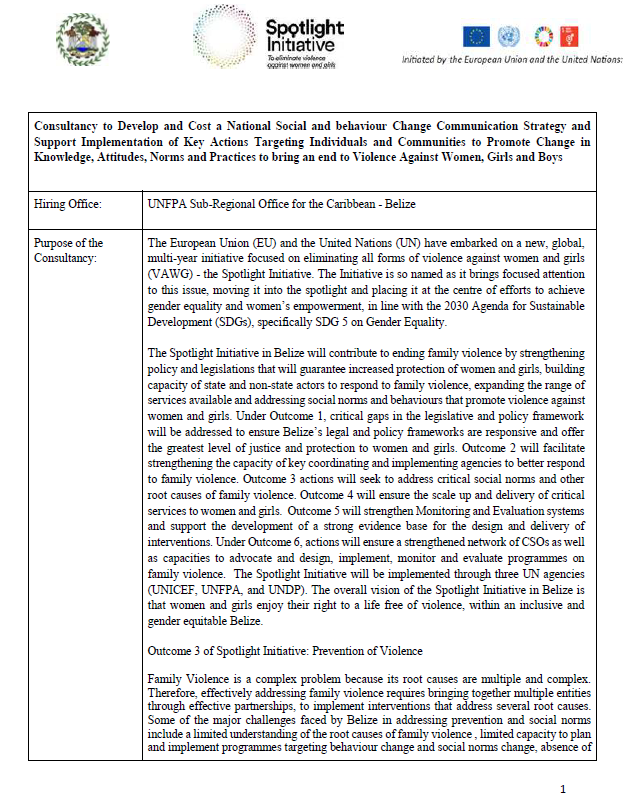 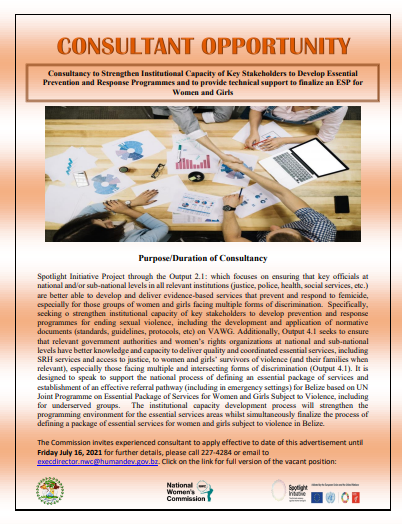 Spotlight Initiative Project through the Output 2.1: which focuses on ensuring that key officials at national and/or sub-national levels in all relevant institutions (justice, police, health, social services, etc.)are better able to develop and deliver evidence-based services that prevent and respond to femicide, especially for those groups of women and girls facing multiple forms of discrimination. Specifically, seeking o strengthen institutional capacity of key stakeholders to develop prevention and response programmes for ending sexual violence, including the development and application of normative documents (standards, guidelines, protocols, etc.) on VAWG. 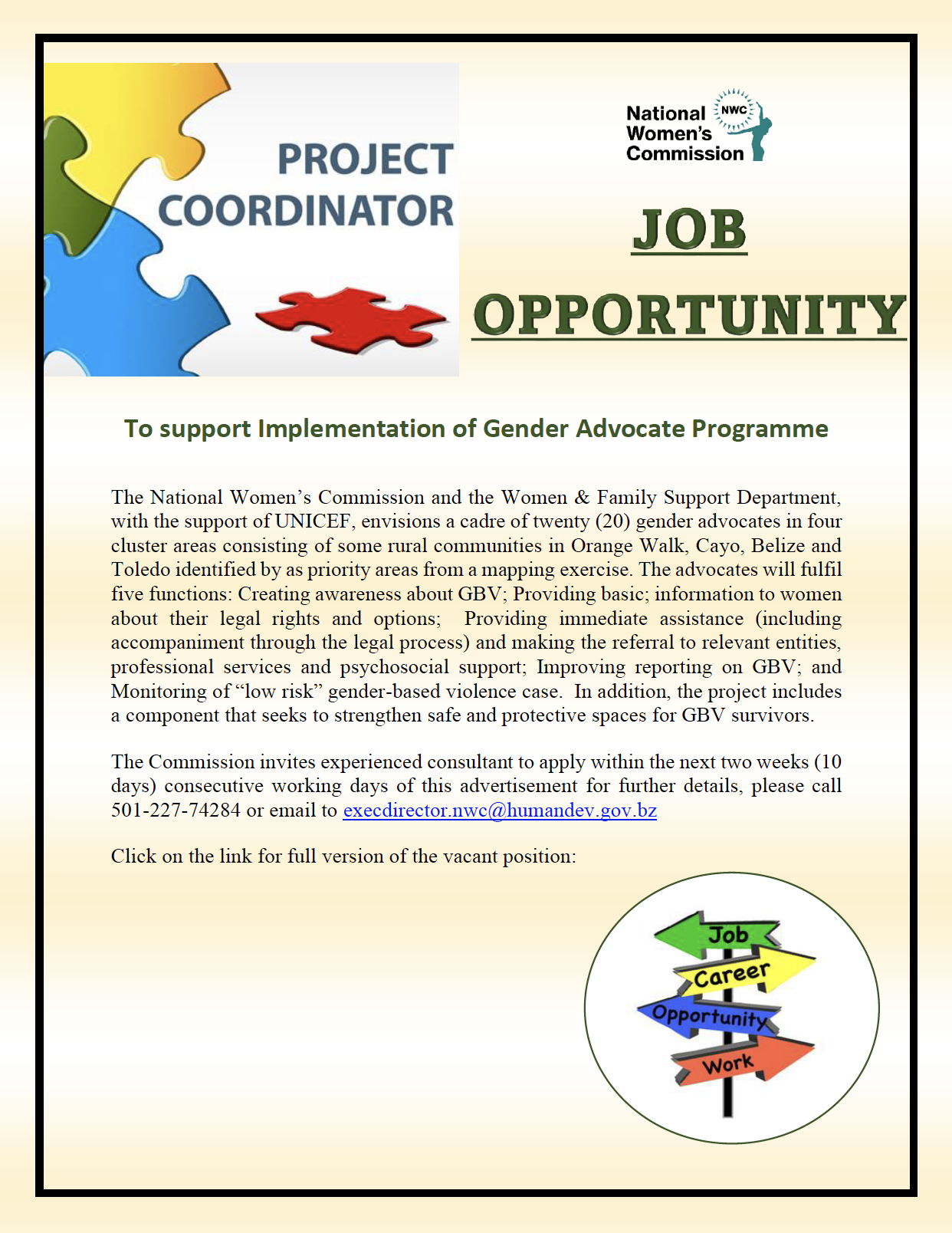 The National Women’s Commission and the Women & Family Support Department, with the support of UNICEF, envisions a cadre of twenty (20) gender advocates in four cluster areas consisting of some rural communities in Orange Walk, Cayo, Belize and Toledo identified by as priority areas from a mapping exercise. The advocates will fulfil five functions: Creating awareness about GBV; Providing basic; information to women about their legal rights and options; Providing immediate assistance (including accompaniment through the legal process) and making the referral to relevant entities, professional services and psychosocial support; Improving reporting on GBV; and Monitoring of “low risk” gender-based violence case. In addition, the project includes a component that seeks to strengthen safe and protective spaces for GBV survivors.